A Search for Talent Leads England Furniture to Virginia

Co-founded by brothers Dwight England, Eugene England, along with their father Charles England, England Furniture has crafted quality upholstered furniture since 1964 and offers customers a competitive selection of over 500 fabrics and leathers from which to choose. With its efficient manufacturing capabilities and customizable products, England attracted the attention of La-Z-Boy Incorporated in 1995 and has operated as an independent division ever since.

After several years of increasing demand for its custom products, England Furniture determined in May 2017 that the time was right to expand on the East Coast. The company’s nearly 1,400 employees had been working overtime at its headquarters in Claiborne County, Tennessee, and the management team sought a new facility with the space and dedicated workforce to accommodate continued growth.

England Furniture had several potential expansion locations to choose from at the start of its search, including Tennessee, Kentucky, and North Carolina. However, Southwest Virginia presented a unique opportunity to secure a large, infrastructure-ready facility in close proximity to its existing headquarters less than 60 miles away. The region offers more than 40 low-cost sites up to 800 acres and buildings up to 285,000 square feet, all with the accessibility to interstate highways that England Furniture required to service new markets across the East Coast and Midwest.

After the company expressed interest, regional partners from the Virginia Coalfield Economic Development Authority followed up promptly to recommend a vacant, 30,000-square-foot facility in Lee County. England Furniture was able to meet with local officials that same month to discuss acquiring the building, and the quick turnaround was an encouraging sign to the company that it had found a welcoming new home in Virginia.

We are delighted to expand our operations into the great state of Virginia. We would like to thank the state and its various agencies for their support, cooperation, and partnership in this endeavor, and we look forward to operating in Lee County and becoming involved in the community.

England Furniture has maintained a commitment to employing the hardworking people of Appalachia since its founding. By exploring sites in close proximity to its existing Tennessee headquarters, the company was able to access the new talent it needed for growth while staying true to its target workforce.

With a long and fruitful history, the manufacturing industry continues to be a pillar of Southwest Virginia’s economy and is served by a skilled extended labor force of over 450,000. The region has built on its manufacturing legacy by working cooperatively with local community colleges, the University of Virginia’s College at Wise, and the Southwest Virginia Alliance for Manufacturing to build industry-driven, tailored training programs. More than 75,000 students in the region are now attending college classes, ensuring that the regional workforce remains prepared for the jobs of today and tomorrow. This emphasis on maintaining a competitive manufacturing workforce assured England Furniture that it could rely on local and regional stakeholders for support in its search for talent

Another Win for Manufacturing in the Commonwealth

In March 2018, England Furniture announced its new manufacturing facility in Lee County, with the aim of creating 79 new jobs within five years. The community of proactive, collaborative partners eager to support the company’s investment and gain much-needed jobs for the region was a key factor in England’s decision to locate in Southwest Virginia.

Virginia worked with the Virginia Coalfield Economic Development Authority, Lee County, and the Virginia Tobacco Region Revitalization Commission to structure a competitive incentives package and prepare the vacant facility for a quick turnaround. State and local partners such as the Virginia Employment Commission, Southwest Virginia Workforce Board, and Mountain Empire Community College proactively identified available talent in the region, conducted a job fair, and assisted the company with training for its ramp-up.

The company has hired 65 new employees to date, surpassing its four-year job projection in just one year. With its sustainable talent pipeline and supportive education institutions, Lee County will continue to supply England Furniture and other high-caliber manufacturers with the skilled workforce to sustain growth in Southwest Virginia.

ROSE HILL, VA – NOVEMBER 25, 2019 — The industrial shell building at the Constitutional Oaks Industrial Park in Lee County, Va., will soon be home to an expansion being planned by Paul’s Fan Company, an existing Virginia business operating in Buchanan County, Va. Up to 15 full-time jobs will be created through the expansion to Lee County as the project matures. Paul’s Fan Company manufactures fans for both mining and non-mining industries.

The announcement was made Monday by the Virginia Coalfield Economic Development Authority (VCEDA) during a ribbon cutting event with Paul’s Fan Company and the Lee County Economic Development Authority (EDA) at the industrial park. It comes on the heels of an announcement Friday that Paul’s Fan Company will expand its operations in Buchanan County and relocate its existing business to the new Southern Gap Industrial Park shell building. 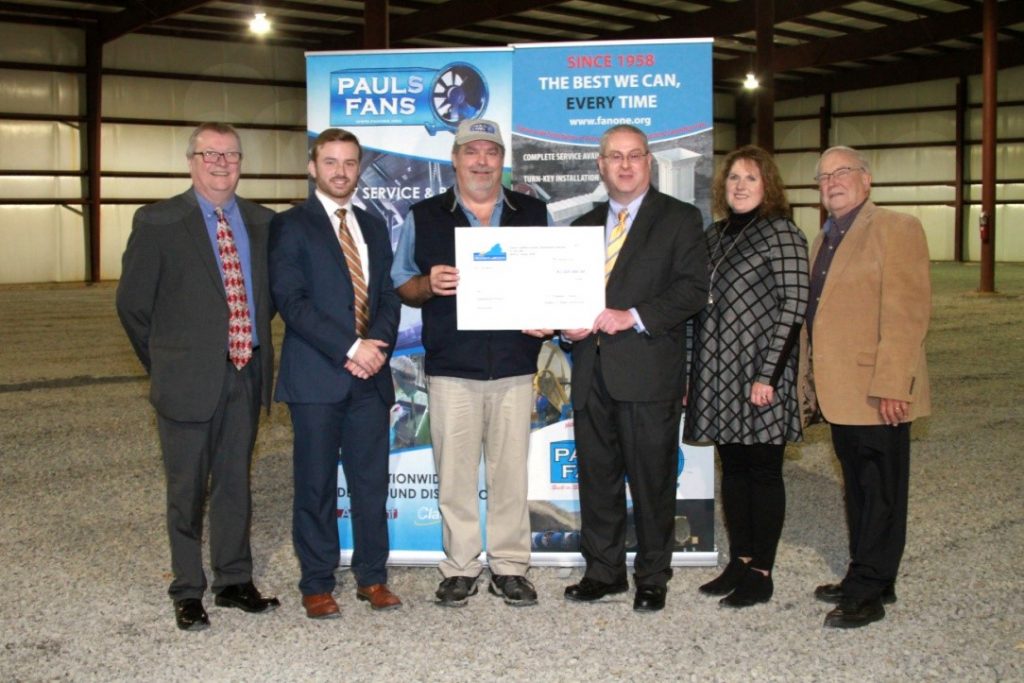 The company plans a new division in Lee County — Paul’s Automation and Controls — which will focus on programmable logic controllers, soft starts and other electrical and electronic gear to support the operation of fans. The Lee County site will also be utilized as a service and

repair facility. Its proximity to existing Paul’s Fan Company customers located in Tennessee and Kentucky was one of the factors in the Lee County site being chosen.

An up to $1.025 million loan to Paul’s Fan Company was approved by the VCEDA board last Thursday when the board met in Lebanon. The company plans to invest at least $2.41 million in its private investment for site development, building improvements, utilities/roads and equipment.

“We are delighted to be here in Lee County today to announce a new business for Lee County and the new jobs it will bring to the Constitutional Oaks Industrial Park,” said VCEDA Executive Director/General Counsel Jonathan Belcher. “We are also happy to announce that as Paul’s Fan Company was looking at expanding, they were also considering a location in Tennessee but ultimately decided they would expand here in Virginia.”

VCEDA and the Lee County EDA have been working with Paul’s Fan Company on this expansion project for several months.

“We are all very pleased and excited to welcome Paul’s Fan Company into the Constitutional Oaks Industrial Park here in Lee County,” said Greg Edwards, chairman of the Lee County Economic Development Authority. “Paul’s Fan Company has a proven record of success in Southwest Virginia and we look forward to the job creation and continued success of the company.”

“We believe our expansion project to Lee County will help us to become more competitive in this geographical area and it will also serve as the hub for our new automation and controls division,” said Todd Elswick, president of Paul’s Fan Company. “We appreciate the assistance from VCEDA and the Lee County Economic Development Authority on this expansion project and we look forward to becoming a new business here in Lee County.”

He added that the Lee County operation will help support the expansion and jobs announced in Buchanan County by securing additional product sales for the manufacturing taking place there.

Lee County is located in the southwestern portion of Virginia. This 438 square mile community is the most southwestern county in the state, bordering Kentucky on the north and Tennessee on the south. The county has abundant natural resources including vast supplies of forests, limestone, coal, crude oil, and natural gas.